Is your “house-trained” dog urinating in the house? what’s next…

By Nicolas BardonMay 30, 2018Tips
No Comments 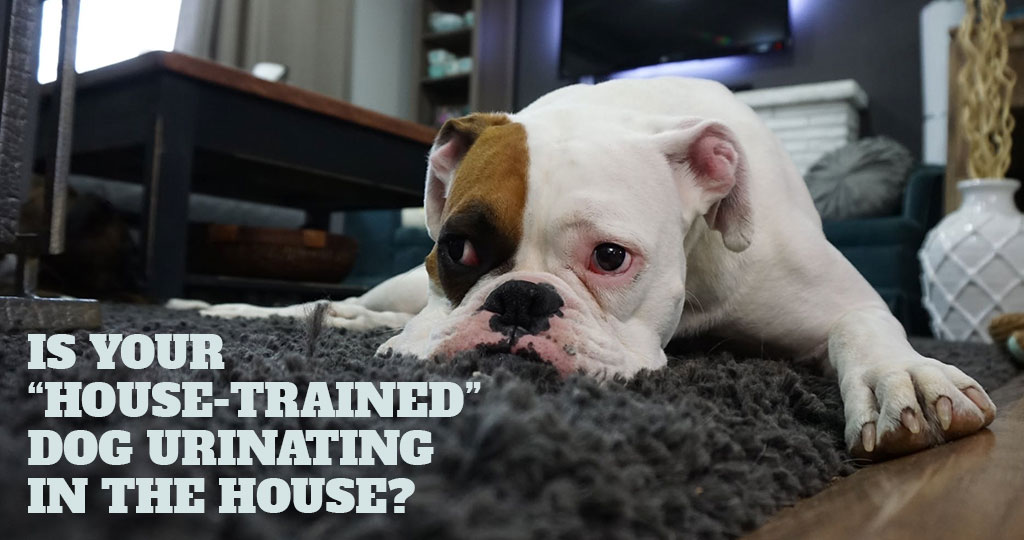 This article was originally posted on www.pinestreetdogs.com

Sometimes what seems like a marking issue could have a medical cause. If the dog has been house trained and suddenly starts urinating in the house, your first thought should be bladder infection or “UTI” Urinary Tract Infection. Get the dog checked by a vet as soon as possible. If the Vet gives an all clear then we have to assume that it is a “marking” behavior.

Because marking often occurs as a response to a perceived threat, think back to what could have started this, In your case the introduction of another male to the “Pack” could have done that. And once the behavior has started he won’t just stop because other dogs leave the house… that is because they could come back or another dog could come in.

So how do you teach your dog that it’s not acceptable to mark inside?

Catch him early, start working on prevention and training. Now that it has become a habit, it will be much harder to get your message across to the dog so you will need to be extra consistent. Marking can be its own reward because it feels good and fills a natural urge. So never reward for anything at least 5 minutes after the marking has taken place, no yelling, just ignore the dog for 5 minutes. Also make sure that when you are rewarding alternative good behaviors, that you use high value rewards (what your dog wants most).

Using punishment may make the problem HARDER to stop! This is because the dog will learn that marking when you can see him is dangerous, so he will wait till you are not looking or not around. This just adds to the frustration for you and adds difficulty to the training.

The goal is to notice the “set-up” behaviors that precede marking. Watch your dog when he’s outside. What does he do just before he lifts his leg? Often there will be sniffing involved and then movement of the body to get on target. This is when the interruption needs to happen when the same behavior happens inside. If you can let him know at the “thinking about it stage” that marking is not allowed, you’ll make it easier to get the message to the dog (and will save yourself some clean-up!) It means you’ll have to watch the dog like a hawk or prevent marking until you can be sure he understands.

Interrupt and redirect sniffing behaviors. There are likely not very many places in your home the dog has not already sniffed. And even if you are visiting someplace new, sniffing is not a critical behavior for the dog to do (though it may be a sign the dog is feeling stressed). So unless you have just dropped a dog cookie, your dog doesn’t NEED to be sniffing around. If you see your dog sniffing, call him to you right away and reward him for leaving the interesting smell and listening when you called! And then get his brain on something else. Or better yet, take the dog outside!

See if he will mark outside instead. If the dog is marking outside- reward that! You want the outside behavior to have a stronger and more frequent history of reward than doing it indoors. If the dog gets “rewarded” high value treats to mark outside and nothing if he does it indoors, why would he want to mark indoors for free? How effective this will be as the only training remedy depends on how much of a habit the marking inside has become.

You will likely need to do this in addition to the other suggestions here.

Clean-up messes correctly and completely! A dog’s nose is very powerful and can detect amazing small amounts of odor causing bacteria and oils and whatever else causes the scent in urine. Completely wetting the area with a cleaner that has an enzyme in it will do the best job of removing the odors. Because enzymes are living organisms, choose and store your products carefully. You don’t want to let them freeze or get too hot or sit around in storage too long, which could kill the enzymes and make the product much less effective. Never use an ammonia-based cleaning product. Ammonia is found in urine, so it will make the dog more likely to try to cover that scent.

Regardless of the training methods above that you choose, you’ll want to also employ prevention to make sure the dog is not marking when you aren’t looking.

Belly Bands are a popular method. If you search the internet for “belly band” you’ll find several sources and many colorful styles. You can also make your own out of an ace type bandage and a feminine pad. The band wraps around the dog, covering his boy parts, so that if he tries to mark, he can’t leave any liquid behind. This means that he doesn’t get the satisfaction of smelling his own scent over the other dogs. It also leaves him feeling wet and putting the odor on himself. Some dogs are really bothered by that and others could care less.

You’ll want to use training in addition to the band, otherwise the dog may need to wear the band the rest of his life, and changing the pad and washing the band is nearly as time consuming as cleaning up messes. It is a temporary tool, not a permanent fix.

Crates, gates, doors and leashes. Restricted his access to all rooms in the house. If you want to keep an eye on the dog, but not use a crate, you can keep the dog on a leash and attach it to you. Whether or not this is a practical solution depends on your situation and dog.

As with any change of behavior, teaching your dog not to mark in the house may take quite some time to teach. The longer he has been doing it, the longer it may take to change. It may require the detection of and removal of an underlying cause (previous urine spots, hormones, medical cause, etc.).

And remember to be patient.

Nico Bardon, Certified Trainer by the National Association of Dog Obedience Instructors #1128 and Pine Street Assistance Dogs specializes in the training of puppies and dogs of all ages in Philadelphia as well as the training of service dogs and the correction of nuisance behaviors in all canines.