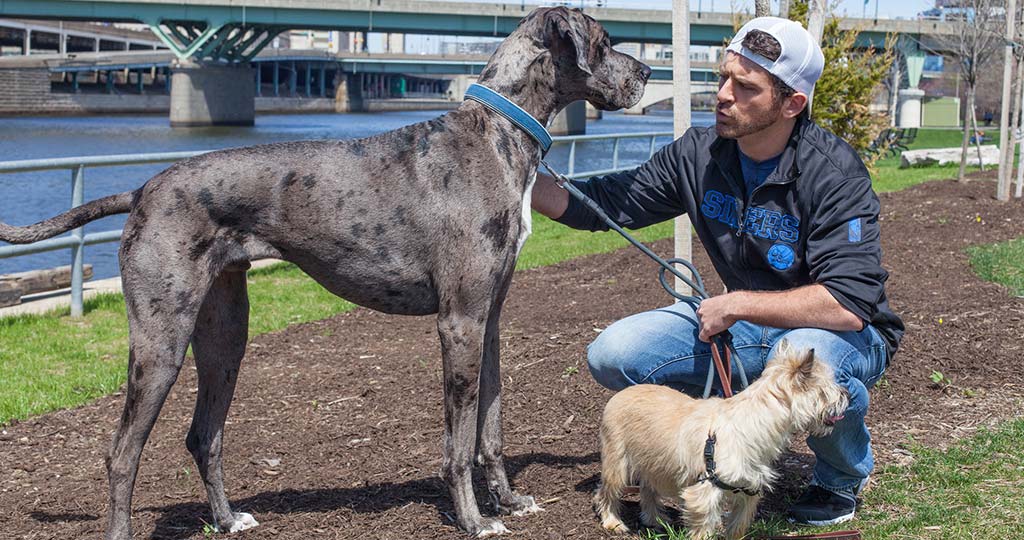 Living in a dog-friendly city like Philadelphia is one of the best places to be.  No matter what neighborhood you live in, what street you walk down, or where you may be spending your time in our beautiful city, one thing is for sure — you will always see someone with a dog (or two or more)!

However, being a dog owner can be a challenging responsibility for many reasons.  This can be especially true in our great city. With an average of 2,354-square-feet, Philly’s homes have some of the smallest yards in the entire country. 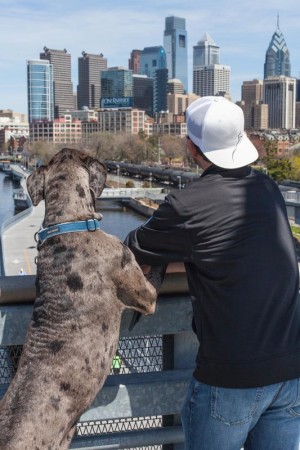 Enjoying the view of the city

Yet, this doesn’t stop the dog owning population from seeking out the most dog friendly spots in the city for exercising, training, playing and just plain old socializing (for both the pups and their human counterparts).

Having three dogs of my own and being a very active member in the dog and pet community in Philadelphia, I have come across some of the coolest places to take your dog for a nice urban outing.  There has been an increasingly large growth in the number of dog parks and dog friendly recreation areas in the city.  A majority of them are some of the only places that allow dogs to be off leash as long as it is within a secured, fenced in area.

Throughout the years the park has attracted residents from the immediate Fitler Square and Rittenhouse neighborhoods, but over the past three years the development of the river park has become a haven for people and their pets from all neighborhoods in the city due to its increased expansion and “great outdoors” feel.

The dog park, or “run” as some are referred, itself is a large, fenced in area that has two sections — a large dog area and a small dog area.  Having these separate areas designated for dogs adds to the “safe” feel that an owner gets when taking his or her dog to the park to let out some energy and they are able to do so in a setting of their “peers” and not have to worry about a Great Dane running over a Cairn Terrier (or vice versa), unless they both play on the same levels.

The two areas each have benches so owners and can sit and relax and bond with others over their most prized possessions (their dogs) and watch them as they play with one another and do some socializing of their own.  Each section has access to doggie water fountains and a hose to use for cooling your pup down or to hose down the unique turf design known as K9 Grass that is made from a soy based plant and is not to be mistaken for astro-turf.  This surface is safe and is visibly appealing and cleaner than regular sod or mulch.

The dogs that come to play enjoy the openness of each section and can often be found playing large games of “Chase” or “Follow the Leader” as they run in circles for what sometimes can feel like hours!

The expansion in the past few years included the addition of the connector bridge that goes up over the dog park and leads to the grassy areas that line the banks of the Schuylkill.  The bridge takes you up to a high peak point where you can look out over the park and the river and into University City or catch an amazing view of our city’s skyline.

The bridge is a way for walkers, joggers, runners, bikers, and so on to access either the park area or lead you to the path along the river or the entrance way to the Schuylkill River Boardwalk that was opened in the Summer of 2014.  The boardwalk is a great place to take your dog for a nice walk over the river and enjoy the fresh air, open feeling and take in the sights that have to be offered. 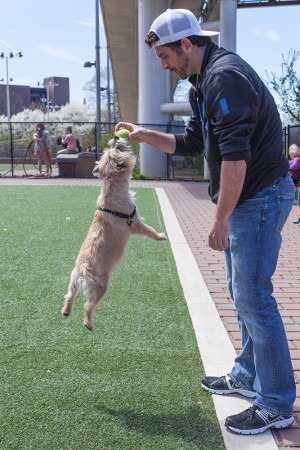 The boardwalk is designed with stopping areas to sit and relax on a bench to give both you and your pup a break.  On any given day you will find a plethora of dogs and their owners strolling the boardwalk to the river path and over the connector bridge to enjoy all the beauty that can be found in Schuylkill River Park.

This urban oasis can be a much welcomed sight after a long day at the office or after a day of being forced to stay inside due to the inclement weather we can sometime experience in the Northeast.

If you haven’t had the opportunity to check out this dog lover’s paradise in our fine city, I encourage you to do so — today!

More info on the park can be found at www.phillyfido.org.

Look for my continuing series on dog friendly places in Philadelphia so that you can continue to enjoy our city with your best friend by your side at all times!

Special thanks to Mutt Squad members Mark (he is in the pics) and Chip (photo credit), plus Mutt Family members Delancey and Bruno.

Britt has been active member in the pet friendly Philly community for many years. Having three rescue dogs and three rescue cats of his own, Britt decided to take his passion for animals and start his own business. Currently he is Owner and President of Muttropolitan Pet Sitting & Dog Walking, a company that services the greater center city Philly metro region. In addition to this, Britt also serves on the Board of Directors for the Morris Animal Refuge, the oldest animal rescue in the country, located right in Center City. Watch for Britt's continuing blog series on "Dog Friendly Philly".